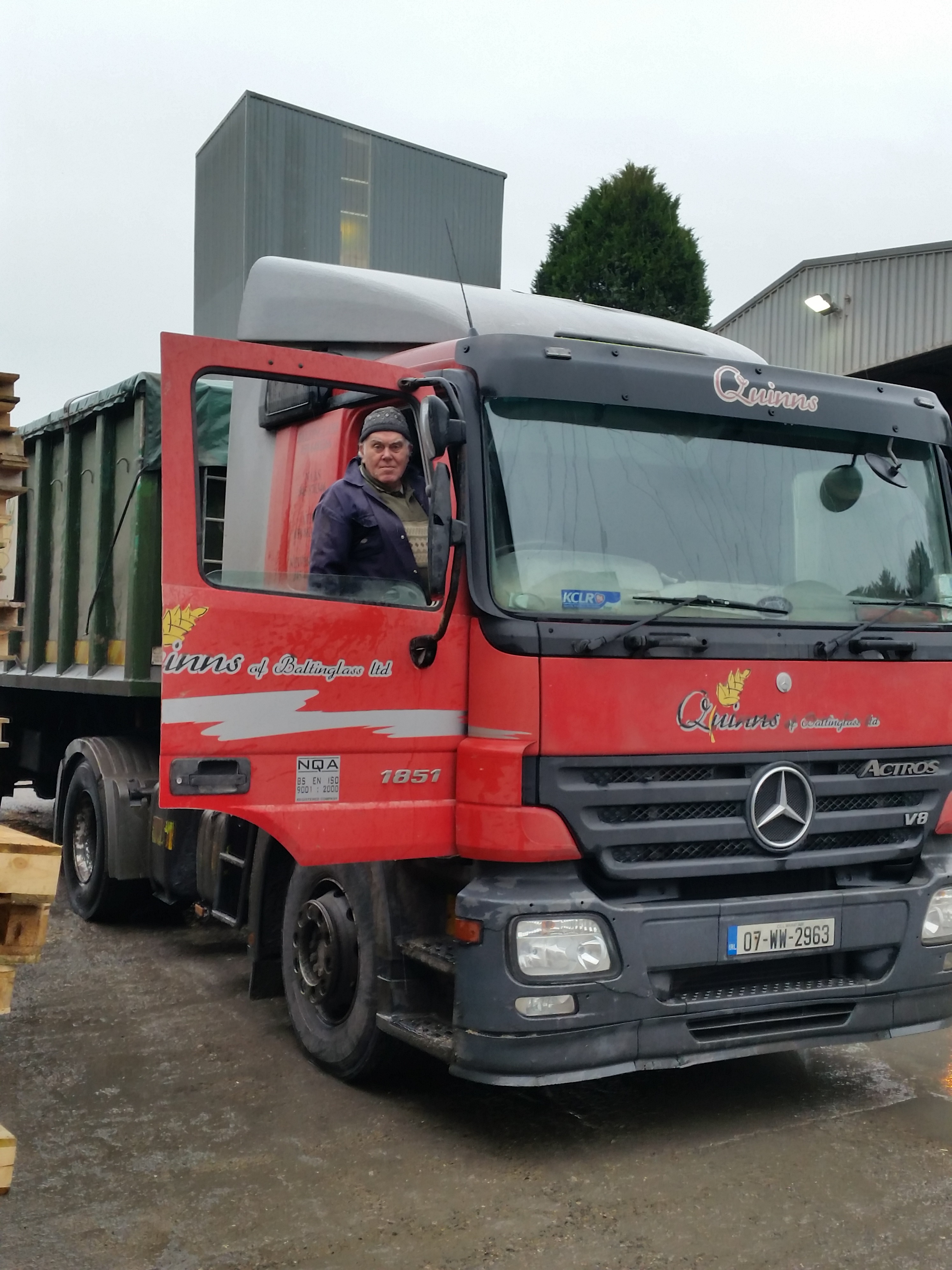 Following hot on the heels of Martin Coleman last year Johnny Martin is the latest person to have clocked up fifty years of uninterrupted work at Quinns!

With the closing down of the garage department at Copes in Castledermot in December 1966, Johnny wasted no time in applying to Quinns of Baltinglass for employment and having had a successful interview with “the Boss”, William Quinn Snr; Johnny began his 50 year love affair with Lorries at Quinns in January 1967!

The first lorry that Johnny drove was an “AEC Rigid” and while it was regarded as a modern lorry at that time, all goods on board were loaded and unloaded by hand – ” hand-balling” it was called! Oh those were the days! A ten ton Bedford IST Tipper followed and this having a tipping trailer was like manna from Heaven! From delivering wheat and barley to a well-known pig farmer in Cahersiveen, Co Kerry to supplying feed mills in Belfast and Omagh, Johnny was known literally the length and breadth of Ireland.

1978 heralded a new era – the era of the artic! A Volvo, Scania and three Mercedes later, Johnny is still travelling around Ireland supplying both bulk feed and pallets of fertiliser and feed, to both our wholesale and retail customers.

One cannot mention Johnny without mentioning his little brother Steven as well! Steven is only driving lorries for Quinns for about forty years and still has a bit to go before he reaches the half century! However, between the two of them, at least eight million miles have been clocked up delivering for Quinns – now that is some record!

Johnny, however, has many strings to his bow! For twenty years, dating from the mid 70’s to the mid 90’s, he abandoned the lorry to do night duty on the “Big Drier” in the Station Yard during the harvest.

Seven days a week during the harvest was no problem to Johnny, except when the “Lily Whites” were playing in the Senior Football Championship. No greater supporter than Johnny to the cause of Kildare football!

Their mother is ninety one year’s young and still hale and hearty so there is no reason why Johnny and Steven with similar robust good health will not reach the ten million mile milestone.

Quinns are very proud to have another of its long and loyal colleagues reach a half century of continuous employment and both congratulate and wish Johnny all the best in the years to come.